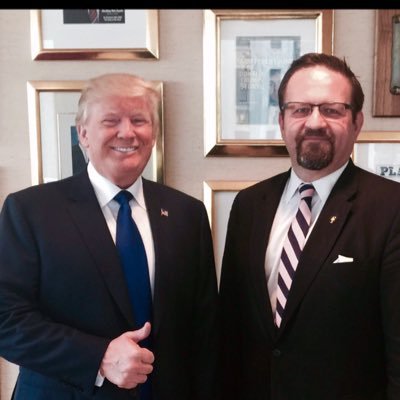 Sebastian Gorka is on the right.. badoom-tish!

One of the curious paradoxes of the Trump administration is that, at the very top, there is a mixture of supremely competent professionals – James Mattis and HR McMaster spring to mind – working in the same national security space as quirky ideological warriors like Stephen Bannon.  Sebastian Gorka, the British-born commentator of Hungarian extraction, who was named as a Deputy Assistant to President Donald Trump in January 2017, seemed to straddle this divide:  an academic specialist in counter-terrorism with some radical ideas about how to defeat Jihadi Islamism.

I took a mild interest in Gorka because he had apparently served in an Intelligence Corps unit of the British Territorial Army (TA) in the early 1990s.  For non-British readers, the Territorial Army* was the name of the part-time British Army reserve established in the early years of the 20th century primarily for home defence but which became, during the Cold War, an integral part of the British orbat in our plans to defend western Europe from Soviet aggression as part of NATO; it was and is similar to the US National Guard in many respects.  As it happens, I was commissioned as a regular army Intelligence Corps officer in 1985 and it’s always nice to see chaps from the Corps doing well for themselves.

Last month, someone on twitter posted a link to this profile of Gorka in the Washington Post and my ‘spidey senses’ immediately began to tingle.  It’s a throwaway sentence:  “He went to college in London and spent three years as a reserve intelligence soldier in the British army, focused on the conflict in Northern Ireland”.  This struck me as extremely unlikely: no part of the TA, to my knowledge, was ever committed to the conflict in Northern Ireland.  The only part-time soldiers to be directly involved were members of the Ulster Defence Regiment and their successors in the Home Service battalions of the Royal Irish Regiment, who had a different legal status to the TA.

A little digging revealed that Gorka had actually been a member of 22 Intelligence Company, of the Intelligence and Security Group (Volunteers) between 1990 and 1992, as he told a Hungarian newspaper.  22 Company was a unit I knew well from my own service. Back then, in the dying days of the Cold War, it was a specialist unit of interrogators and ‘tactical questioners’ with a NATO role.  It was an eclectic group of people, recruited largely on the basis of their language skills, who were trained under the auspices of the Joint Service Interrogation Wing at Ashford in Kent.  As the son of Hungarian exile parents and a Hungarian speaker, Gorka would have been a good fit.  But it had nothing to do with Northern Ireland, so if Gorka was claiming this in the US, he was being somewhat economical with the truth.

In itself, this is kinda, sorta understandable.  Gorka took a first degree in Theology and Philosophy at a theological college of London University and his subsequent transformation into a counter-terrorism theorist seems to have taken place whilst he was studying for a Master’s degree, and subsequently a PhD, in Budapest which might be seen by some to lack the credibility of equivalent qualifications from, say, Harvard or Cambridge.  I can see why he might want to have credentials as an operational counter-terrorism specialist from one of the world’s leading armies.  It doesn’t make it true though.

A week or so back I asked a friend, who was in 22 Company at that time, whether he remembered him.  “I don’t recall Gorka immediately, but that’s not to suggest that we may not have collided at some time in the great Venn diagram of life”, was his response.

As it happens, Gorka was profiled (paywalled) today by the Sunday Times in London.  It’s a soft piece, written as a kind of ‘hometown boy makes good’ story, but interestingly, it presents a new version of his military service.  According to the Sunday Times:  “Gorka spent three years from 1990 as a part-time soldier with the Territorial Army. Part of 22 Military Intelligence Company, he used his language skills (he speaks German and some French as well as Hungarian) to collect evidence for the war crimes tribunal set up after the collapse of Yugoslavia”.

Once again, the spidey senses twitched.  Would members of 22 Company really have been collecting war crimes evidence between 1990 and 1992 when Gorka was a member?  It seems unlikely to me: their role was collecting intelligence, a very different task to collecting evidence that could be used in a court.  A couple of other easily checkable facts also seem to suggest this isn’t true: firstly, there were no significant deployments of British military personnel to the former Yugoslavia until September 1992 when 1 Cheshires Battlegroup deployed under the command of Lt Col Bob Stewart (now a Conservative MP) on Operation GRAPPLE as part of UNPROFOR; secondly, the International Criminal Tribunal for the former Yugoslavia wasn’t actually set up until May of 1993.

It seems to me possible that Gorka might have been employed interviewing – ‘debriefing’ in intelligence jargon – individuals returning from the former Yugoslavia to gain snippets of information from them.  Members of 22 Company certainly did this with returnees from Iraq and Kuwait at the start of the Gulf War in 1990 (I know this because I was one of the people who organised it) and I’m told the ‘Defence Debriefing Team’ was put on a more formal footing thereafter (by which time I’d moved on).  Even so, at this stage it wasn’t about acquiring war crimes evidence but rather basic situational awareness, so he is evidently dramatising his role, if indeed he ever did this work.

So what?  In the grand scheme of life an individual exaggerating his military service is no big deal. It’s kind of distasteful, I suppose, but it happens an awful lot and most military veterans I know find it funny, more than anything else.  But there are special circumstances in Gorka’s case.  He is a senior advisor to the Commander-in-Chief of the most powerful armed forces that have ever existed.  Gorka’s views appear to have been formed by his studies at a university that is not renowned as a centre for the study of counter-terrorism and, despite his attempts to suggest otherwise, he has never been an operational practitioner of counter-terrorism.  By all accounts that I have read, Gorka has never done any academic fieldwork in counter-terrorism either.  His real expertise seems to be in getting gigs as a ‘talking head’ on right wing news media, the rest is pretty much flim-flam.

It’s up to President Trump to decide who he wants to advise him, of course, but my experience over the years has been that proven bullshitters are rarely a good choice.

40 Replies to “Sebastian Gorka and his distinguished military career.”