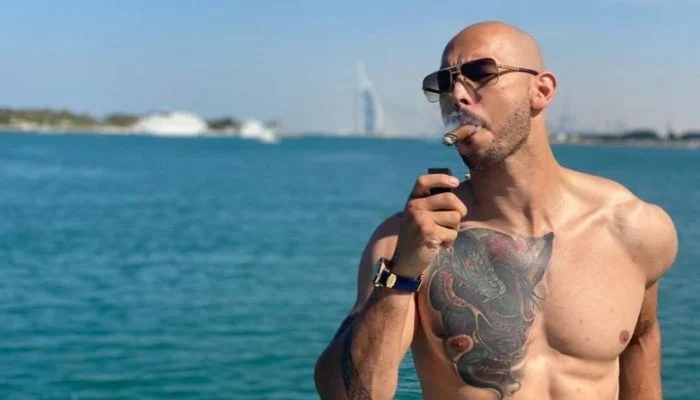 Let me introduce you to Andrew Tate. As far as I remember I hadn’t heard about him until a few days ago. He is a former kickboxer of US and British extraction who has apparently become wealthy in some mysterious way; who has succeeded in amplifying his fame on social media by making disagreeable and misogynist remarks about women; and who has now been arrested by Romanian police for alleged involvement in human trafficking*.  Is his brand of masculinity ‘toxic’?  Well yes, it would appear to be; is it ‘traditional’? Er, no.

Then there is an Australian turned American who appears on social media, billing himself as ‘Nick Adams (Alpha male)’ (that’s him on the right in the picture above), who appears to believe that being a regular customer at ‘Hooters’ – a US restaurant chain where the food, basically fried chicken and beer, is served by pretty young waitresses in tiny orange shorts and low-cut tops – is emblematic of ‘alpha male’ virility (hint: it really, really isn’t).

Call me a sentimental fool, but I think of my father as a good example of traditional masculinity. He was a scientist who, for most of his working life, taught chemical engineering at Imperial College in London and, for the latter part of it, was also responsible for the pastoral side of student life as College Tutor. He wore a suit and tie during the week, and a tweed jacket and tie at weekends, except during the summer holidays when he would don a short-sleeved shirt and a pair of shorts and develop a suntan that, in my memory at least, would last for the rest of the year.

As an undergraduate during the Second World War, Dad was captain of the University of Wales 1st XV as a second row forward, and he went on to play some top level club rugby for a few years after the war had ended, but he carried on playing recreational rugby well into his fifties, with Imperial College’s ‘Extra 3rds’ side. He also boxed, winning the University of London heavyweight championship (in about 1948 I think) but his real love was cricket. He was a decent enough villagey/clubby level player, but I think he adored the drama of it all, and he loved hanging out with cricket people.

As a father he was, for his time, quite involved.  He changed nappies, he took us to our primary school by bus and he read us each a story every night. If we bumped our knees or our heads, he would ‘rub it better’ with his ironed handkerchief. He would always come and watch if we were playing school sport; he never missed parents’ evenings; and when I was away at university and later, in the army, he would write a chatty letter to me every week or so without fail.

He didn’t – and basically couldn’t – cook; and he didn’t have much to do with the housework apart from washing up after meals, but he was always happy to help. He grew some of our vegetables and, after he retired and my parents had moved to Chiswick, he kept an allotment where he grew more. My parents didn’t argue or fight: their marriage was an equal partnership which lasted for 38 years until my father died.  Society changes.

I never saw him drunk and I don’t recall him ever shouting at me or any of my siblings. He never hit us. I never saw him cry, and it would have greatly disturbed me if I had done; and I don’t remember seeing him obviously very angry either.  But he was no stranger to emotion.  The Second World War was the great shaping event of his early life. His best friend at school in Builth Wells was Vincent James, son of the local watch repairer (Dad’s parents owned the drapers’ shop), who disappeared whilst navigating a training flight in a Mosquito in 1944 and he occasionally spoke about how much he missed him even late in life.

My Dad (right) with his friend Vincent James, both aged 16, harvesting near Brecon in the summer of 1940

But really what he liked to do was revel in the positive:  great cricket and rugby players he had seen or met; Churchillian quips; Monty’s victories; that kind of thing. When he came to London after the war to do his Masters’ he lodged for a period in Rillington Place and he used to joke that he shared gardening tips over the fence with ‘Reg’ Christie, but he had a great fund of stories from his early life in Wales; his travels in Europe by bicycle after the war; rugby tours; cricket tours; and so on.

So, that’s what I think of as traditional masculinity. Being self-disciplined and decent and trying to be the best person you can for yourself and your family. The whole muscles, tattoos and beards thing is irrelevant; it certainly doesn’t involve dressing like a cartoon pimp and coercing women into pornography; and it doesn’t involve perving over teenaged waitresses at Hooters like a creepy uncle.  All that is grift to monetize the incel fandom and can be safely ignored.

*What Tate actually has been doing, according to his own website, is meeting young women, forming relationships with them and then coercing them into performing in pornography online for his personal financial benefit. This appears to be why the Romanian police have arrested him and, to be quite clear, well done to them but why has it taken so long? What a repulsive scumbag he appears to be.