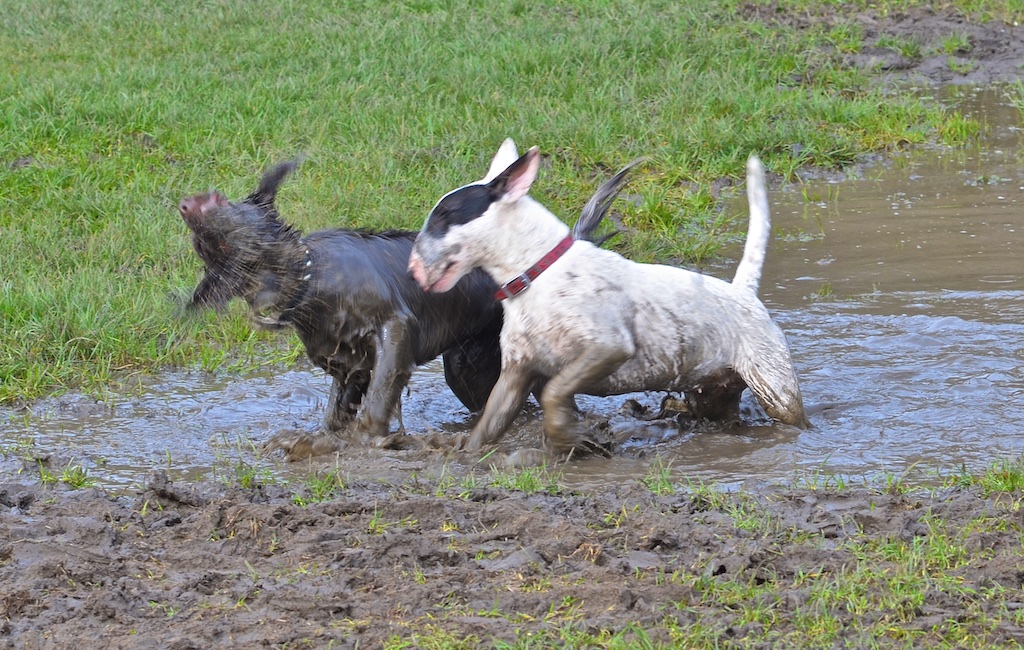 Back in the day when I first had a dog of my own, things were different.  In those golden times, the world was a somewhat less health and safety conscious place and – somehow – dogs behaved better too.  When I took my Cairn Terrier Edward for walks back in the eighties, we would get to the stage where, perhaps with a discreet cough or slight twitch of his magnificently shaggy eyebrows, he would indicate that nature was calling and veer off into the gutter, often positioning himself directly over a sewage grating.  There he would let fly, safely out of the way of any inquisitive infant or trophy wife in hand-made Louboutins, and that would be that.  At some stage a street-sweeper would come along and clear any remaining debris and the world would continue to turn.

That’s all changed.  I don’t know what it is with dogs these days – maybe it’s too much X-Box or violent pornography on the internet – but neither of our current pair shows any inclination to drop its guts in any but the least convenient and hygienic location imaginable.  Think: outside a street cafe or kindergarten at best.

Which raises the important question: what does the modern, polite, city-dweller do with the poo?

The first answer is, obviously, that you pick it up.  No ‘walkies’ take place, in the Weale family at least, without the responsible adult carrying at least four ‘poo-bags’ (Sainsbury’s economy nappy sacks are the preferred brand) in order to clear away the debris, whether it has been deposited on the pavement, in the gutter or the park.  And, particularly if you ‘double-bag’, it’s no problem to make a pretty thorough job of it too.

But what do you do then?  Round us, the Royal Borough of Kensington and Chelsea, have erected a network of bins where the carefully tied bags can be safely and hygienically deposited.  Kensington Gardens is pretty good about this too: they’ve installed some heavy, cast-iron poo-bins with hinged lids, which look ideally suited for holding toxic waste of all descriptions.

The First World Problem begins to arise when one inadvertently strays outside the poo-bin network.  A hawk-eyed person watcher in Kensington and Chelsea will often spy a well-heeled dog owner making their way through the streets with their beloved pet attached to one hand, a small plastic bag of dog shit clutched in the other and a slightly desperate look in their eyes as they cast about for a suitable receptacle.

Well I suppose that’s bearable. Dog owners soon learn to take the rough with the smooth. But it can occasionally be compounded.

The question is, and I’ve yet to see it addressed by any etiquette expert, is what do you do when you meet someone rich, famous and/or powerful whilst weighed down by a bag of dog turd?

This situation arose for me a couple of years ago.  I used to walk my daughter to our local primary school every morning and, more often than not, would take Griz, our Bull Terrier, for a run round Kensington Gardens afterwards.  On one particular occasion, Griz decided that it would be a good idea to take a somewhat extravagant dump en route to the school.  I duly cleared it up and we continued onwards but I knew that I had, in fact, passed the point of poo-bin no return and would not come across another until we reached the park.  Never mind, I thought, there would be no particular reason to delay once Dido was duly dropped off and I could continue as normal.

This turned out to be a false hope.  For some reason on this particular morning, as I made my way through the throng at the school gates, everyone seemed to want to talk to me.  The final straw came as I was just about to break free.  The local Vicar, Fr Gillean Craig, who is also Chairman of the School Governors, hailed me as I passed.  He was chatting to another parent and wanted to introduce me.  It turned out that the other parent was Michael Gove, then Secretary of State for Education.

There’s probably an art to juggling a Bull Terrier, a bag of said Bull Terrier’s shit, giving a polite handshake and making well-informed small-talk about the state of the education system (I was Chairman of Governors at another local primary school at the time) but if so, I haven’t mastered it.  And there’s no denying that, notwithstanding a carefully applied reef knot, the bag was somewhat pungent.  To be fair, Mr Gove seemed unfazed: I suppose you get taught that at politician school; but I was in a vortex of middle-class embarrassment.  It didn’t improve things to bump into Samantha Cameron – also a parent at the school and who I knew slightly from when she was a governor at ‘my’ school – after I’d extricated myself from Mr Gove and the Vicar.

So, all in all, a tricky question of modern manners: where does one politely put a dog turd in social situations?