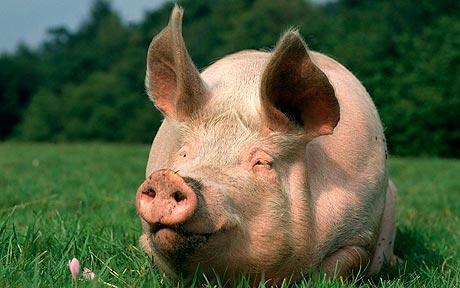 I can’t imagine that David Cameron is particularly delighted that Michael Ashcroft and Isabel Oakeshott’s new and ‘unauthorised’ (I’ll say!) biography of him suggests that he might have indecently assaulted a dead pig’s head during a Piers Gaveston Society party at Oxford in the 1980s.  No Prime Minister wants to walk into the Commons for PMQs to a chorus of pig-grunts.

I suppose the big lesson in this – apart, obviously, from keeping your schlong away from the mouths of deceased livestock if you have any political ambitions at all – is that it is unwise to piss off vengeful billionaires who have donated millions to your political campaigns and have time on their hands.  I certainly try to avoid it.

Oddly enough, nobody has ever invited me to a ‘sex-with-dead-pigs’ party and I never heard of any happening at the university I did attend (York, as it happens: a nice place and a very good university, but lacking the cachet of Oxbridge).  I expect it was all taking place in secret.

The journalist and educationalist Toby Young tweeted a link today to a piece he wrote back in 2009 about Oxford’s Secret Societies which does seem to offer some insight into the rise of pig-fucking parties.  Young characterises the Oxford social ‘elite’ in his day (he was at Oxford at the same time I was at York, and overlapped with Cameron) as being  young, rich but essentially middle-class ‘wannabes’, aping the fantasy idea of the aristocracy and Oxford that had inspired Evelyn Waugh particularly, but also P G Wodehouse and others.

In 1981 Granada TV ran a hugely successful dramatisation of Waugh’s ‘Brideshead Revisited‘ and Harper’s and Queen published ‘The Official Sloane Ranger Handbook‘ in 1982.  These had a significant impact on some students of the time.  Public school was cool and, all of a sudden, a tranche of ex-public school types (and wannabes) at universities across the country swapped their disguise of skinny black jeans, ear-rings and Clash t-shirts, for tweed, corduroy and Barbour jackets.  I would mock them more if I hadn’t, to my shame, been mildly caught up in it too.

Students at British universities have always done stupid things like get drunk, take drugs and flash their nether regions at inappropriate times but in the 1980s, there was a period when it was cool to do so whilst dressed in white tie and implausibly claiming that your grandfather was an Earl.

Of course, whilst students like David Cameron were striving to appear to be languid but debauched aristocrats to their fellow undergraduates, they were actually working their arses off to get ahead.  In the job I currently do, I get to see raw ‘aptitude’ (i.e., IQ) scores for a range of young people, mostly undergraduates and recent graduates, and it’s noticeable that those for candidates who are, or who have been, at Oxbridge, aren’t significantly different from those who have attended less prestigious institutions.  A couple of years ago I was chatting with Tony Little, then Headmaster of Eton (one of my sons went there: aren’t I grand?) and he told me that Etonians were like swans: they appear to glide along effortlessly but under the surface they’re pedalling away like the clappers to succeed.

What I suspect this means is that the kids who get in to Oxbridge – and the other top universities – are those who discovered their work ethic in the early-to-mid teens and  acted on it.  This is certainly true now and was also the case in the 70s and 80s.  Back in 1982, I thought about applying to Oxford but an unusual – at the time – wave of reality washed over me when I thought about how much work I would have to do to convince any half decent college to take me, so I didn’t waste my time.

So what is the significance of the alleged pig’s-head molestation?  Zero, I think.  It will doubtless be acutely embarrassing for David Cameron, particularly if the alleged photograph does emerge, but it was something that happened when he was a pissed kid.  I have no doubt whatsoever that at the same time that the future Prime Minister was pretending to be a louche aristo, others at Oxford, from a similar background, were smoking dope in evil-smelling squats plotting the imminent downfall of the bourgeois hegemony, or drunkenly dressing in SS uniforms; whilst spending the rest of the week assiduously attending lectures and tutorials, writing essays and polishing their CVs for the graduate milk-round.

That’s just what some students do.

After I graduated, I went to Sandhurst to learn how to be an army officer.  One of the student officers in my company was an Oxford graduate who had been a member of ‘The Assassins’ as an undergrad.  He was one of the most startlingly dull and stodgy twerps one could imagine: more Rotary Club than Hellfire Club.  It had clearly been a big moment in his life but it had passed.  I don’t know what he does now – like me, he didn’t stay in the Regular Army – but accountancy or chartered surveying wouldn’t surprise me.  I wonder how many pigs he abused?

It’s worth mentioning that I strongly doubt that the pig story is true.  As the ex-Political Editor of the ‘News of the World’ points out in a blog for the Spectator the provenance is incredibly weak. ‘An anonymous source knows a bloke who has a picture but we haven’t seen it…’ would get laughed out of any news conference outside of Exaro News.  No publisher I’ve ever worked with would have allowed me to put this in a book without some rock-solid corroboration.  I suspect that it’s there for three reasons:

As it happens, I was an intelligence officer in Belize, where Ashcroft is based, in the early 1990s.  All sorts of stories used to circulate there about the supposedly nefarious ways in which he had made his money, none of which, so far as I could tell, had an iota of truth to them.  But chat with an ordinary Belizean and they would assure you that Ashcroft was the biggest gangster in the country. Unsubstantiated rumours are a very cheap and effective way of trashing someone’s reputation.